I’ve had a lot of time to read this week (whoop! Unemployment!), and with my shiny new library card, I’ve been scouring the shelves for some beautiful, funny, and searingly honest YA reads to share with you. Unemployment ends soon (hopefully – keep your fingers crossed for my trial shift tomorrow…) as my bank balance is seriously dwindling, but hopefully I’ll keep finding time to read some of the wonderful YA that’s being churned out left, right and centre.

Side note: there’s so much great young adult fiction that’s being produced at the moment – a lot of it focusing on mental wellbeing – and I haven’t yet found the time to read them all. These are some of the books I’ve read recently that I loved – but don’t doubt there is so much more out there to be explored.

“I think real kindness, real compassion, is having the strength to stop and try and see where another person is coming from. To try and work out why they’re being the way they’re being. It takes time and patience. It’s not as easy, but that’s real kindness.”

Holly Bourne has been one of the big names in YA for many years now, and is really a spectacular writer who brings so much knowledge and experience of young people to her writing. I loved reading It Only Happens In The Movies a few months ago – so much so that when I was working as a bookseller, I was constantly recommending it to young girls. I’ve heard so many great things about Are we all lemmings and snowflakes? that I was a little wary going in to read it; but trust me, I wasn’t disappointed.

Now, I’m a big fan of ‘summer camp’ narratives. Don’t ask me why. Maybe it’s because, as a kid, it always seemed like such a far fetched, American thing (look, I went to Brownie camp, but it really wasn’t the same, okay?). The novel follows Olive as she heads to Camp Reset; a clinical trial aiming to benefit those suffering from mental illness. Olive’s narrative is so easy to get wrapped up in; I found myself empathising and hugely relating to her. One of my favourite things about Olive – and this whole novel, if we’re being real – is that her symptoms, behaviours, and thought processes are not glamorized in the slightest. This is a raw and honest novel about inner turmoil and overcoming psychological boundaries – and it’s also going to make you laugh ’til you cry. I was super emotional when I finished this one; it truly deserves it’s Bestseller spot.

2. What I lost by Alexandra Ballard 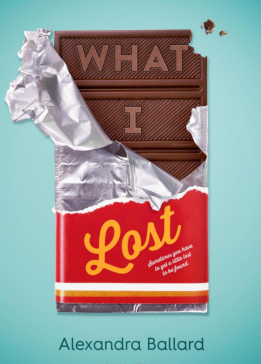 “You have been through a war. And you’ve won.”

Here’s what Elizabeth has lost so far: 50lbs, a boyfriend, and her peace of mind. Then, she’s sent to a mental health unit for young people with eating disorders. Obsessed with being a size zero, and constantly influenced by her mother’s own eating difficulties, Elizabeth is in a constant back-and-forth narrative when it comes to her recovery. I think this whole narrative was hugely accurate when it comes to disordered thinking, particularly about food and weight, and it’s written in a very sensitive way.

After completing my MFA dissertation on eating disorders in young adult fiction, I’ve done an awful lot of research on this topic and was excited to read this one and really see how the author had chosen to approach it. Elizabeth is a relatable and fully-rounded character, and the other girls in the hospital were all so likeable and became some of my favourite characters. The only flaw in this novel would be the lack of diversity within this kind of environment – something I also researched into last year – but I don’t think this takes away from what this novel has achieved at all. The major demographic for eating disorders (particularly AN and BN) is young, white, women – and this is what we see in this novel. I’d like to see more diversity in the future of YA fiction exploring more men and BAME demographics: but Ballard has written a beautiful novel here. It’s heart-wrenching but often light-hearted; equal parts delicate and fierce.

3. Colour me in by Lydia Ruffles

‘No such thing as just friends,’ says Mizuki. ‘Friends are more important than anything else.’

I know I don’t have to bang on about good old Lydia, because The Taste of Blue Light is still one of my all-time favourites and I know I’ve raved about it plenty to you guys. Needless to say, when I found out Ruffles had written a second novel, I snatched that UPC right out of the Waterstones staff room quicker than you can say, well… anything. Colour me in is such an important read – particularly  for lads, for once (down with toxic masculinity!) and I would recommend it to any teenage boy in a heartbeat.

We start the novel with unemployed child star, Arlo, who is living far away from his mum, and with his best mate. It’s clear from the get-go that Arlo is struggling mentally; he seems to be falling back into a pit of depression, but he’s desperate to keep up appearances for his fans and family. The only person that seems to understand is his best friend, but when he suddenly dies, Arlo is left alone. Grieving and mentally unravelling, he catches the next flight to wherever, and ends up on an unexpected adventure.

This one’s about friendship, and talking openly about mental health, and learning to ask for help, and letting go. It’s so very moving, and Ruffles’ descriptions and dialogue are as flawless as ever. It’s definitely worth a dabble (and look at the gorgeous cover!).

4. After The Fire by Will Hill

“Bad and good, False and True: they’re the opposite ends of a whole spectrum of behaviour, not the only two things a person can be. Because life just isn’t that simple. People aren’t that simple, even though I’m sure things would be a lot more straightforward if they were.”

Okay, hear me out. This one isn’t technically focusing on mental health at all… But it’s about a girl who has recently left a cult, and trust me, the girl has got issues. From Chapter One, I was utterly confused about what had happened to poor Moonbeam, and this feeling will stay with you for quite some time. Determined not to give anything away to her new therapist and the FBI agent that accompanies him – the ‘Servants of the Serpent’, as she calls them – Moonbeam is constantly arguing with herself in her head.

This is a story about breaking free from what you’ve been conditioned to believe, and that’s why I think it fits in well with the list I’ve compiled here. This is a story about a girl who has been following the words of a false prophet for so long, she can’t distinguish between what’s right and what’s wrong anymore. The supporting characters as well – particularly Luke – are all so realistic, and haunting in their actions and beliefs. This book opened my eyes a lot, and I think it’s important, uplifting, and empowering. After The Fire is Moonbeam’s story, and her journey to, finally, finding herself.

5. The Rest Of Us Just Live Here by Patrick Ness

A friend of mine read this a while ago and wouldn’t stop singing it’s praises, but it took me a long time to get round to actually picking it up. When I did, however, it was finished within the day. Because… well. It’s pretty incredible. If you pick up this book and read the blurb like I did, you’re likely to be confused by the concept (I definitely was), so I’ll do my best to explain.

Protagonist Mikey lives in a town that seems to be affected by weird supernatural things. So much so, that everyone is just kind of used to it. There’s references to this ‘vampire outbreak’ they had last year, and weird things are always happening, and there are the “Indie Kids” (think, the “Chosen One’s” of Mikey’s town) who are running around fighting battles. But Mikey isn’t one of the Chosen One’s. He’s actually pretty normal – or he wants to be anyway. One of my favourite things about The Rest Of Us Just Live Here is that there’s an equal mix of contemporary, honest, deteriorating mental health plot, and supernatural, ‘we’re off to save the world!’ plot. It really helps lift the darker parts of the novel, and also offers so much in the way of subplot that there isn’t a single sentence in the novel that isn’t pushing the narrative forwards.

The idea of this book is: if you’re not the chosen one, and you’re kind of on the side-lines… what’s your story? Mikey’s story is full of obsessions and compulsions and heartbreak and sibling bonds and this desperation to just be good enough. I personally think this is Ness’s best book yet (fight me), and I think the characters and their delicately intertwining lives have been masterfully created.

The thing I took away from this book is: we are all the chosen ones, really. Even those of us blending into the background will always have a story to tell.

Reminder: if you find yourself in Oxford, my ‘Mindfulness Writing’ masterclass runs every Saturday until December 1st at Common Ground Workspace, Little Clarendon St.