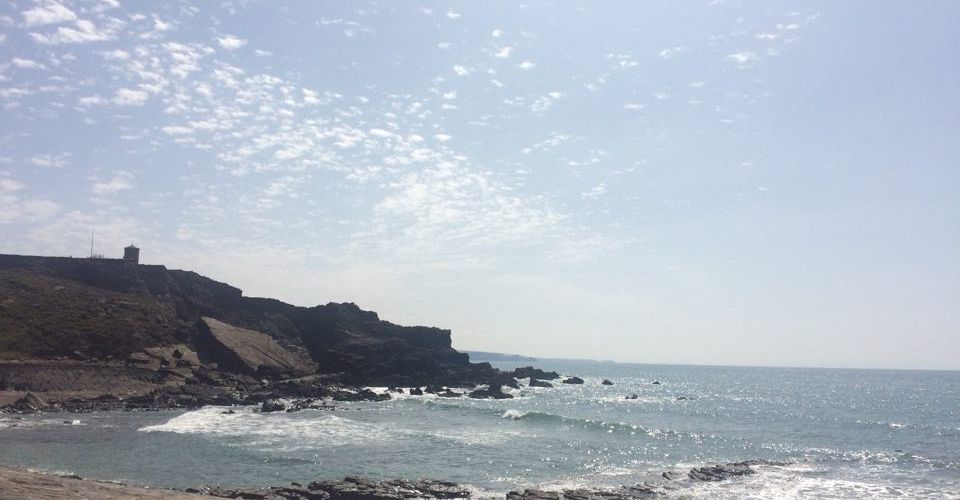 Well, it’s been a couple of weeks since I’ve written anything on here: I’ve been off in Dorset working as part of a festival production team, spent a few days back home in Manchester seeing my family, and now I’m back with Beth, living in Cornwall for the summer.

It was so strange being in the north again – not because of where I was, but more because I was spending the night in a real life house for the first time in what felt like ages. Sure, I was staying on my mum’s sofa, but still being in the confines of four walls felt totally bizarre! Even when I went to work on Larmer Tree festival, I was staying in a tent, so it kind of felt like a home away from home. Still, it was wonderful being home for a short time and seeing everyone again!

Even though it felt like nothing had changed in Manchester, it was weird to go to the same places I’d always gone as a teenager and see nobody at all that I knew. I went back to the town I went to school in, and didn’t see a soul that I recognised. How times have changed! I reckon everyone has moved on by now. Even my Nana had popped off to Skegness when I went back…

I managed to squeeze in some coffee dates with people that were still hanging about – like my best friend Josie who has just come back from backpacking around Indonesia (seriously, I’m so jealous!) and my ex-teacher and wonderful friend Fran, who gave me bags of writing advice and life-coaching, as usual. Recently, I feel as though I’m even more appreciative of the friends I have that I don’t see all of the time: even though our meetings are few and far between, the love is always stronger than ever.

My oldest younger sister, Lauren, and I, spent a lovely evening in a hotel in Manchester (a stay-cation, if you will), where we had dinner with her boyfriend, went out for some drinks, and I got another cheeky tattoo. I had a wonderful time seeing everybody again, and then I hopped on a seven hour train journey to meet Beth in Exeter, where she picked me up and drove me to our new home.

So now we live in Bude – for the time being anyway – which is probably one of the prettiest seaside towns I’ve ever visited. We’ve spent the last few days popping in to see all of Beth’s family (I really do feel like I’ve been meeting the in-laws… When you share the same tent and get invited to family barbeques, it’s no wonder people think you’re together). She’s taken me to some beautiful places (including an old, haunted church…) and every member of her family seems to want to feed us all the time, which is great for the old bank account (and they’re all super lovely!!).

We’ve even managed to swing a great deal at the campsite we’re living on, where we essentially live for free by doing work on the site like cleaning, feeding animals, social media stuff… So, everything is lovely down this way! The weather has been perfect so far, but apparently we’re expecting some thunderstorms over the weekend. I’m so excited – I’ve yet to experience a thunderstorm in the tent and it’s bound to be wild.

Meanwhile, I still have that novel to write, so I’ve been working on my manuscript for a few hours each day, and I’ve also been thinking about more writerly things… I’ve had a lot of time to commit to this over the last week or so, and I’ve launched my plan into action today.

So I’m very pleased to announce that I’ll be running my own writing workshops from September onwards! My very first workshop will being Saturday September the 22nd in Common Ground, Oxford (UK),  and will be titled Mindfulness Writing. I’ve never publicly spoken about my experiences with mental illness, and it still doesn’t feel like the right time, but what I will say is that I have absolutely used my writing as a form of therapy these past few years, and I’m ready to pass on what I’ve learnt to others.

If you’re interested in coming to my very first adult workshop (suitable for ages 14+), and you happen to be around Oxford in September – or you know someone that might be interested – you can have a little look on the facebook event group, or keep up to date with this blog for more information.

Anyway, Beth’s lovely mother is cooking us dinner, so I must dash. It’s a beautiful Cornish evening here, and I hope the sky is as blue wherever you are.

It’s going to be a summer of tents, caravans, sofa surfing and – hey, quite possibly – maybe a couple of nights in a cardboard box. But since we reached the end of the tenancy on our house in Bath and decided to renounce city living altogether, we have truly committed to having no fixed abode. The first leg of our unconventional journey began yesterday, when we packed up a three-story house and moved into a tent instead.

It’s no surprise that we were fully unprepared for the amount of pure crap we had to move out of our home. We happily went swanning off with our friend Olly to go out for dinner, blissfully unaware of just how much needed to be done. I think it’s safe to say, our smiles faded when we arrived home at 9pm to pure mayhem. We spent the next five (six? seven?) hours cleaning, throwing stuff out, finding more stuff to throw out, running out of bin space, seriously considering fly tipping… Random junk from tenants previous suddenly became our responsibility to get rid of and it took us a long time (and a whole lot of recycling) to finally get the house to a good standard.

The next morning, packed and ready, we awaited the arrival of the new tenants for the momentous Key Handover. Despite having lived there for the last three years, I still don’t think it’s really sunk in that we don’t live at number 25 anymore. We loaded half of our stuff into the car (because that’s all we could fit in the car) and left the other half to pick up later in the day. It seemed like a great plan until we got in the car and it felt like the vehicle might just crumble under the weight of our two-tonne tent. 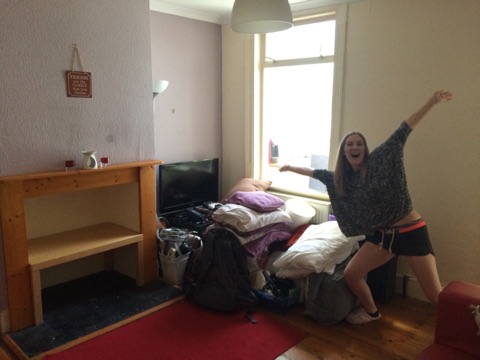 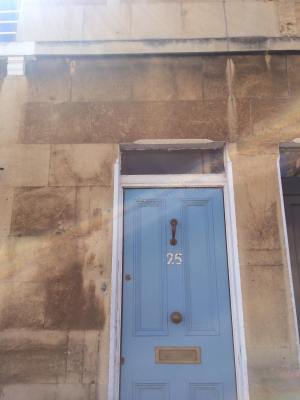 And so, we said goodbye to number 25, and hello to… well, a field. It’s important to me that everybody knows that on the tent instructions, it said the assembly time was 3hrs 30mins. We put up this bad boy in 50 minutes (coffee & lunch breaks included). 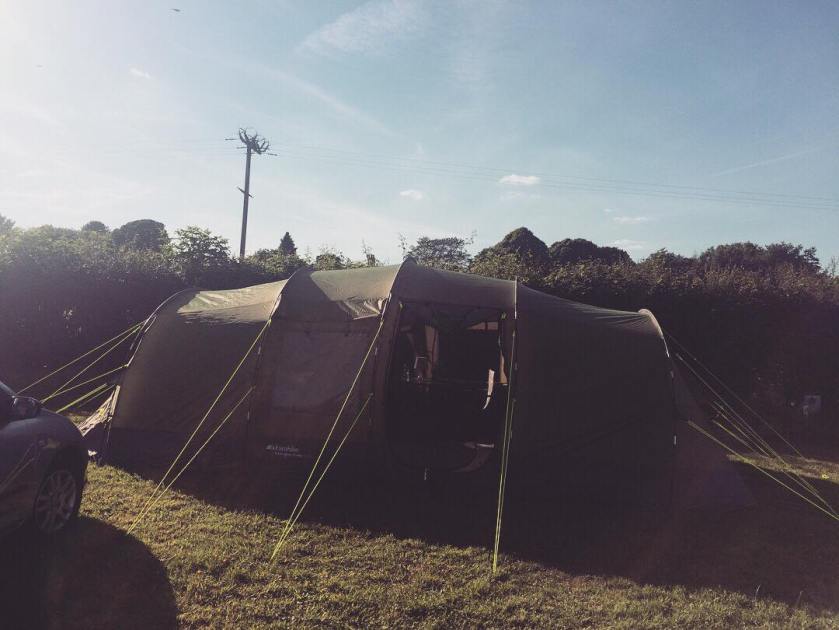 It was a work of art. We were thrilled. Finished assembling the tent by 3pm, we then battled traffic to get back into Bath and pick up the rest of our stuff – stopping off on the way for ‘supplies’, aka lots of bottled water, custard creams and minstrels. It was definitely one of the hottest days we’ve experienced this year, and we were in a field with no shade, so there was definitely a whole lot of sweat and sunburn going on. We organised the inside of our casa – until it looked like the most adorable and civilised living space – and then went to scope out the campsite showers. 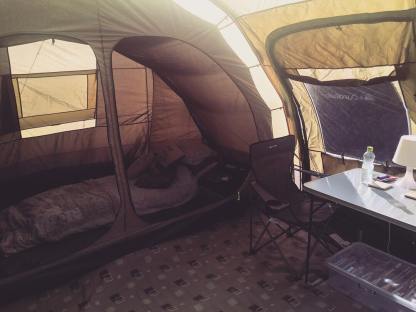 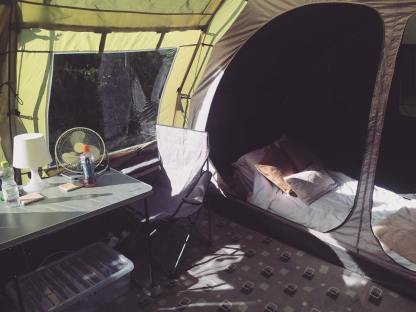 There are only two toilets and two showers on our site, both in little adjacent cubicles, so Beth and I have now taken our friendship to a whole new level by maintaining conversation whilst showering and peeing.

After freshening up, we received truly adorable directions from the campsite owner to the local pub. Those included ‘cross the field, climb the style, and follow the church spire until you see it’. We’re only half an hour down the road, but this feels a long way away from city life in Bath.

The weather is glorious, and even though we had to wake up at 6.30 this morning to get ready for work, our morning commute was really beautiful. Time to get to work now, but I’m sure the day will be easier knowing I get to go back to my little tent at the end of the day. I have never known a place to have so much birdsong and so little light pollution! 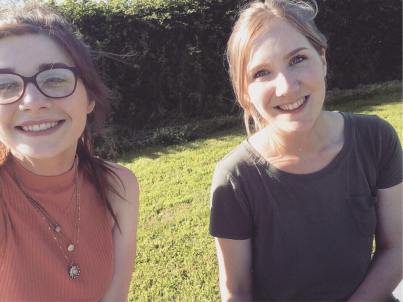